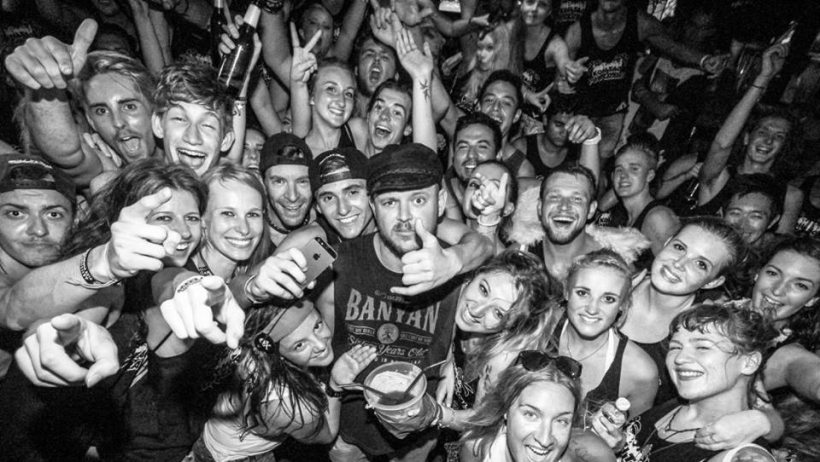 This was a difficult list to compile. Almost every show I have played since the #looptheworld adventure began has been memorable for one reason or another. Special mention has to go to Choppers Bar, Koh Tao. Those hot, sweaty nights with the Koh Tao Pub Crawl made up a huge amount of the memories that the tour has brought me so far. Every night at Choppers was another crazy party. So too were all of my performances at Harmony, Ios. However, this here list is about those single shows that stood out. The shows that warmed my heart and kept me on a high for days after getting off stage. Those shows that reward me more than financial gain. The shows I’ll remember long after my career is over. The shows I’ll look back on and smile.

A festival stage definitely helps to make the top 10 list. A big crowd, a great PA, a professional sound man, the whole kit and caboodle. This was also the last show before we took #looptheworld international. On a more personal note; Surfers Paradise Live Festival was special because my family was there. My mum, my little sister Megan and my adorable little nephew Malakai. It was also the first time my newborn nephew had left the house since his birth. I’m very proud of this fact. It will be a story I tell him when he’s older. I hope one day he takes up the musical adventure that has brought me so much satisfaction.

Of all of the countries we have visited so far England was by far the most difficult. Arriving in London was a bit of a shock to the bank account and the gigs were less frequent and often for less money. This didn’t stop us from having a great time.

On our first night in London we visited the Spiritual Caipirinha Bar in Camden after it had been recommended by two of my musician friends, Grim Fawlkner and Tara Minton. It was an open mic night so I jumped up and played a few tracks. Straight after me there was a young guy named Daniel Greenwood that got up and sang a few beautiful pop folk songs. Afterwards we got chatting and he invited me down to play a showcase for a local musician collective called Amwell. I was flattered and graciously accepted.

I didn’t really know what to expect. Daniel gave me an address and told me to rock up mid afternoon.  When we got there we were greeted by the owner of the house and the co-founder of Amwell, Roy. He took us through the little London terrace and out into his cosy inner city backyard where Daniel was setting up a small stage beneath the kitchen window. We then spent the afternoon listening to a bunch of amazing local acts, drinking cider and eating Roy’s famous home made pizza. As the sun began setting Daniel invited me up to perform for everyone. It was a beautiful afternoon and a true pleasure to play for such an appreciative group. Paolo the  videographer was there to catch all the action.

A few weeks later Roy sent me a copy of what they filmed. I think it came up really well. Thanks Daniel, Roy, Paolo and all the gang at Amwell Collective. I look forward to doing it all again when I get back in March.